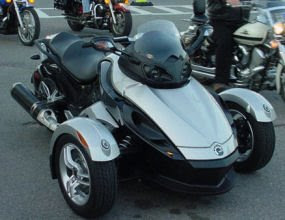 On the Motorcycle Views Forum there has been a discussion of the Can-Am™ Spyder™ Roadster. This is a so-called reverse trike with two wheels in front driven by one wheel in the back. I decided that I would test ride a Spyder™ at Americade 2008 at Roaring Brook Ranch (RBR) and report on it here.

The Spyder is made by a Canadian company, Bombardier Recreational Products, Inc. (BRP), located in Quebec. Another of their products is the Ski-Doo® snowmobile. In fact, I had commented before in the forum discussion that the Spyder looks strangely like a snowmobile.

The Spyder was launched in February, 2007 and has managed to strike a chord in many riders. It appeals to riders wanting to go to a trike but wanting more power, traction, and sportiness.

I hadn't realized just how devoted to safety the Spyder is. It has a Vehicle Stability System (VSS) that includes an Anti-Lock Braking System (ABS), a Traction Control System (TCS), and a Stability Control System (SCS) all integrated to keep the Spyder flat footed and stable at all times. They make you watch a video before you go out for the demo ride that demonstrates the VSS. It's a system you can't turn off. However, for purposes of the video, they did turn off the system and then ran through some cornering and swerving maneuvers -- some in the rain. For the most part, these non-VSS maneuvers resulted in disastrous results with wheels coming completely off the road and the rider having little chance to stay in his lane. When the VSS was re-activated, the performance was rock solid with the rider in no trouble at any time.

The riders' meeting held before the demo ride was a complete run-through of all the controls with special emphasis on how the Spyder steers. It may be a motorcycle but it does not countersteer. No push-right go-right for this baby. You have to steer it like a car, except it doesn't have a steering wheel. It steers using the standard handlebars. Now this requires a temporary rewiring of your brain to make steering the Spyder work. I know from experience that you have to reprogram yourself to go from a two-wheeler to a three-wheeler. Otherwise, the first time you have to make a quick correction to avoid another vehicle, you'll think countersteering instead of steering. That usually takes you right into the object you're trying to avoid.

The Spyder also uses a variable power steering system. At low speeds, it provides more power to help you turn the handlebars. As speed increases, the power effect diminishes so you have near normal road feel.

Also, as part of the riders' meeting, the complete safety card was covered. This card is built into the top of the dash. You pull it out to read it and we were read every word on the card. One of the last words on the card was how you start the Spyder. If you only know how motorcycles start, you might never figure out how this thing starts. Most everything in the start up procedure is the same as a motorcycle except you need to release the side emergency hand brake and then press the "M" button on the dash to start the machine. There is an initial system start up process that you view on the dash.

There is no front brake lever. All brakes are controlled by a right foot brake.

I found myself slumped slightly forward in the seat. I understand that there are some accessories that allow for a more straight up seating position.

As we traveled in a group around the interior road at RBR, we were encouraged to steer right and then left to move the bike back and forth across the road much like the Indy cars do to warm up their tires. Our purpose, again, was to get used to the steering before we hit the highway.

On the last stretch of interior road there is a particularly bad, uneven, section that I always have trouble with when I ride my traditional trike. With my trike, I feel every bump and jolt, some very violently. With the Spyder, I felt only a very smooth ride even though I was weaving across the road and hitting every bump with force. I was impressed with the ride.

When we hit the highway, the speeds quickly rose to 45-55 mph on a two-lane road. I was soon aware that the high speed power steering was just a bit too fast for me. I wasn't getting the road feel I had expected. I guess one could get used to it though.

The Spyder handled very well. I did feel that I was sitting a little high on the machine. I also had a very low windshield. I'd call it a fly screen. Twice at speed I was hit smack in the middle of the face shield on my full face helmet by a large bug. On my own Gold Wing trike with the standard windshield, that never happens to me. I found out later that taller windshields are available.

The gas tank for the Spyder is under the seat. You have to release the seat and it rises up so you can reach the filler.

There is a storage compartment in the front. It opens forward to contain two full size helmets with a little room left over. The headlight hits the top of the opened compartment and shines down so you can see inside. Handy.

There is a full-gear reverse on the bike activated by a lever on the left handlebar grip.

With the popularity of the Spyder, I'm told that a touring model is being planned. When I was at Tour-Expo, the vendor area of Americade, I noticed a Spyder in the Corbin area. It had a tall windshield, hard saddlebags and other storage areas, and a two-person Corbin seat. I thought I was looking at the new Spyder Touring model. When I asked the Corbin rep, he said, "Nope, it's our accessories all integrated together to turn the bike into a tourer." Once again, Corbin was ahead of the curve. See Corbin website. They even give a demo that shows how I got hit by the bees. 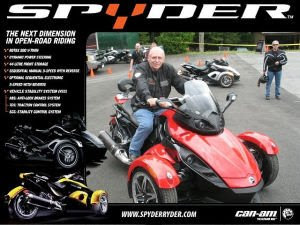 At the end of the demo ride, the Can-Am folks take your picture as you sit on a Spyder and make it available to you in two days on the Internet. Here's my picture. Note the slightly forward riding position.


Most everyone taking the demo seemed very impressed with the Spyder, as was I.

See Americade 2008 - Day 7 for all the rest of my activities on the day I rode the Spyder.

My complete activities for Americade 2008 may be found on Americade Motorcycle Rally Day-by-Day Blog for 2008.
Posted by Unknown at 9:33 AM