On certain motorcycles, the electronic control unit (ECU) ignition timing and idle mixture were improperly set during production causing the engine speed to drop and stall the engine when the temperature of the cooling system exceeded 180F. If the engine stops while the motorcycle is being driven, it could increase the risk of a crash.

Check out my Motorcycle Recalls feature for more details.
Posted by Unknown at 4:15 PM No comments:

Are Motorcycles Safer than Horses?

The old motorcycle helmet debate may be shifting to the equestrian world where many horse riders are being seriously injured since they don't wear helmets or protective apparel. Here's a quote from globeandmail.com:

"Hour-per-hour in the saddle, more riders are seriously injured riding horses than motorcycles.

That is the surprising revelation of a new study from researchers at the University of Calgary.

Equally surprising is that those being hurt and killed are not rookie equestrians but, in large part, veteran riders." -- ANDRÉ PICARD

Offer your own comment below.
Posted by Unknown at 9:05 AM No comments:

Last Monday, an unusual art exhibition was held at the Seventh Regiment Armory in New York City. It involved 10 motorcycle stunt riders who rode for seven minutes on 288 panels of painted plywood. So much smoke was expected that a special test run was done with smoke machines to confirm that the air would still be breathable. Here's a quote from the New York Times article by Carol Vogel, entitled, "After Test Runs, an Armory Is Ready to Declare, ‘Artists, Start Your Engines’ ."

"Look, it’s going in the right direction,” said Doreen Remen, a founder of the Art Production Fund, a nonprofit organization that presents unusual public art projects. With her co-founder, Yvonne Force Villareal, and the artist Aaron Young she gazed upward with relief as the smoke began filtering out the open windows along the rafters."

At the actual show played to 500 invited guests including members of the Hells Angels, art history was made. Read more.
Posted by Unknown at 10:15 AM No comments: 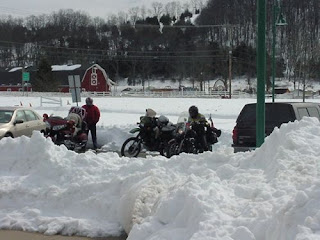 This week finds me somewhat between two motorcycle worlds. A few days ago I received the new riding schedule for the 2007-2008 Polar Bear Grand Tour. It’s my job to convert this schedule into something readable on the Polar Bear Grand Tour Web site. Then when the season starts, I take pictures at each run and post them on the site. The season doesn’t start until October 28th, the last Sunday in October. However, over 500 participants will be looking for the new schedule shortly so it’s important that not a lot of time goes by before it’s posted. Unfortunately my wife and I were scheduled to attend a state rally here in NJ for the GWRRA (Gold Wing Road Riders Association) so all work on the schedule stopped.

As I’m thinking about winter riding again with the Polar Bears, I see many riders in the north starting to think about slowing down their riding and putting their bikes away. Of course, most riders will prolong this until riding just gets too cold. The Polar Bears see no benefit in putting their bikes away and so don heavy protective clothing, most opting for electrically heated vests, gloves, pants, and even socks as the temperatures drop into the 40s, 30s, 20s, and lower.

Meanwhile, the GWRRA rally turns out to be a pretty late rally falling this year on September 6-8. That’s after Labor Day so people have stopped thinking about vacations and are now concentrating on school and jobs. That means it’s hard to attract people to attend. Next year, this rally will be held in early August.

The GWRRA gathering we attended was small and most of the participants knew each other. Although the organization is divided into chapters located across the state and nation and even internationally, there is considerable interaction of members among chapters. That makes many GWRRA gatherings seem like family reunions to outsiders. That’s what outsiders have remarked after seeing so much hugging and kissing going on as member couples run into each other at functions. Often it’s difficult to go from point A to point B without getting stopped by other couples for lengthy conversations. After one conversation ends you almost immediately run into another couple which starts another conversation. And so it goes.

Of course, historically, GWRRA tends to attract husband and wife riding couples who ride two-up on the same motorcycle. Lately, however, in the last five or six years, I’ve seen a steady increase in the number of women riding their own bikes. Thus, where ten years ago, almost no GWRRA women rode their own bikes but instead chose to ride pillion, now many GWRRA couples have two bikes, a Gold Wing for the husband and a separate bike (not necessarily a Gold Wing) for the wife. The couple concept remains except one bike has been replaced by two in some cases.

There has also been an increase in the number of riders preferring to ride motorcycle trikes. Again, within GWRRA the Gold Wing motorcycle is the basis for the trike with the rear wheel removed and replaced by two automotive wheels and an automotive rear end. The trike part has extra trunk space needed since the normal saddlebags have been removed. Again, in keeping with the need in some cases for both the husband and wife to ride their own motorcycle, some couples have opted to ride individual trikes. Such is the case for my wife and me. 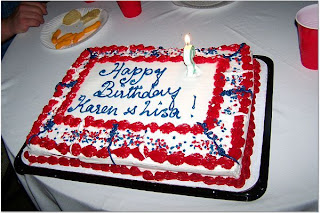 At these small GWRRA gatherings, the standard rally activities occur such as seminars, bike contests, people games, bike games, organized tours, self-guided tours, vendor sales, light parade, entertainment, and awards dinners. There’s plenty of time for socializing, admiring bikes, and eating too. The gathering we attended was heavy on ice cream, birthday and anniversary cakes, laughter, fun, eating, and picture taking. There wasn’t much drinking except for soda, tea, and coffee. That may be the reason that you won’t find many underweight Wingers. Along with all this socializing, the Wingers are very safety conscious taking skill improvement courses all the time to learn how to be safe on the road.

I’m not giving away any inside stories here. If you want to participate in all this fun, you’ll have to join your local GWRRA chapter and go to a rally on your own. However, what happens at GWRRA gatherings can be pretty tame. It’s certainly family oriented. I saw quite a few children who attended with their parents and even two girls who appeared to be about 9-10 years old who won youngest passengers arriving on a motorcycle.

Now, I’m back from the rally and need to get back working on that Polar Bear schedule. Of course, all 500 of us Polar Bears are continually having to explain to outsiders that we don’t go in the water on New Year’s Day. That’s those “other” Polar Bears.

Got any comments about your own motorcycle gatherings? Post them below.