Mary Murphy, Star of "The Wild One," Dies

The girl-next-door waitress, Mary Murphy, who played opposite Marlon Brando in "The Wild One," has died at 80.

For a classic picture of Mary with Brando in a scene from "The Wild One," read about her life and death.

The number of units affected is 160.

Check out my Motorcycle Recalls feature for more details.
Posted by Unknown at 7:35 AM No comments:

Coming and Going on Bikes: Essaying the Motorcycle

I review this new Kindle book of motorcycle essays written by Jack Lewis. Here's an excerpt from one of the essays:

"Crank 'er up with the button, or use the kick lever if you feel nostalgic (and why wouldn't you?). The Ural sits panting like a puppy with a ball, slyly inviting you to play outside." -- Jack Lewis

Read the review.
Posted by Unknown at 3:39 PM No comments:

Motorcycle Pictures of the Week - Jenny and Ken 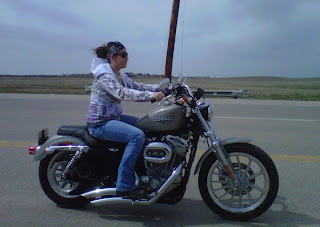 Here are my Pictures of the Week as displayed on the Motorcycle Views Website. This feature has been expanded to include Bikes Only and Trikes Only. These pictures are taken from the Moto Pic Gallery. See Jenny on her 2008 Harley-Davidson Sportster XL883L under Women on Motorcycles. Also see Ken on his 2007 Honda CBR600RR-7 under Men on Motorcycles. There are no Trikes Only or Bikes Only this week. We need more pictures of men and women with their motorcycles. Get your picture in. For details, see Motorcycle Pictures of the Week.
Posted by Unknown at 8:01 PM No comments:

These motorcycles were built with an incompatible thread locker/screw combination at the front fender mounting.

The number of units affected is 1955.

Check out my Motorcycle Recalls feature for more details.
Posted by Unknown at 8:40 AM No comments: 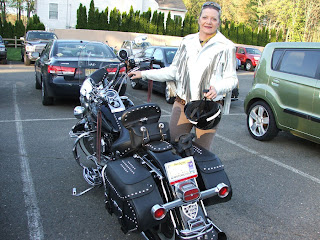 Military Personnel Advised to Ride Safe in the Spring

It's May Motorcycle Awareness Time again. All the major publications are advising motorists to watch out for motorcycles. But the military has the same problem on its bases. At Joint Base McGuire-Dix-Lakehurst in New Jersey, they take extra precautions to train their personnel in safe riding techniques and to promote safe riding including wearing proper protective riding apparel. Here's an excerpt from an article on their website by Staff Sgt. Carlton Anthony:

"No one expects to be seriously injured or die in a motorcycle mishap when Joint Base McGuire-Dix-Lakehurst warriors begin hitting the roadways. Unfortunately, every spring the number of motorcycle mishaps spike due to several factors: inexperience, risky riding, alcohol, speed, distractions and fatigue. All these factors are preventable and may lead to fewer accidents during this time of year." -- Staff Sgt. Carlton Anthony

Read more of this article.
Posted by Unknown at 9:18 AM No comments:

Five-Year-Old Brings His Harley to Preschool

Conor, a five-year-old preschooler, won a real Harley and decided to bring it for Show-and-Tell. Here's an excerpt from the article appearing in the Wausau Daily Herald by Molly Newman:

"Conor led a line of classmates past the Harleys parked outside the preschool at First Presbyterian Church, 200 S. Lincoln Ave. The 20-child class collected stickers, candy and toys and explored a firetruck and police car. The students also were outfitted with Harley T-shirts. 'It's my leader day. I get to be the leader,' Conor said." -- Molly Newman

Check out the rest of the article and see a picture.
Posted by Unknown at 8:47 AM No comments:

Could an airbag find its way to your next new Honda motorcycle? Honda seems to be serious about this. Check out this recent United States patent application for a motorcycle airbag system, complete with drawings. What are your feelings about an airbag for your motorcycle? Are there better alternatives available?
Posted by Unknown at 7:34 AM No comments: