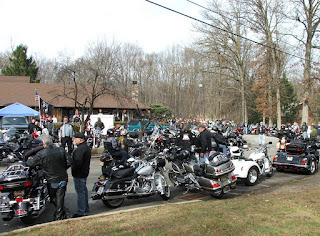 Motorcycle Picture of the Week - George 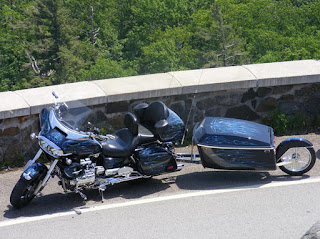 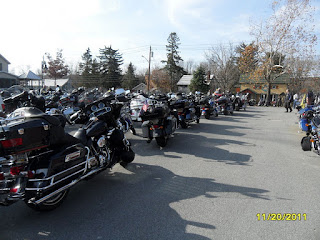 Motorcycle Picture of the Week - Herb

These models were built with a left hand rear wheel brake instead of the required right foot operated rear wheel brake. Therefore, these vehicles fail to comply with the requirements of Federal Motor Vehicle Safety Standard Number 123, "Motorcycle Controls and Displays."

Posted by Unknown at 9:24 AM No comments: 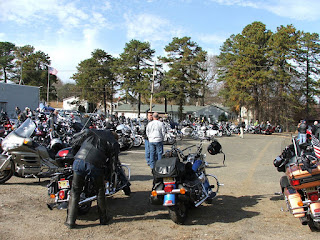 Riding Motorcycles in the Gambia

The following story was submitted by David Beardsley, Siofe Village, The Gambia in Africa. David had sent me three YouTube videos for my YouTube Motorcycle Videos feature. He then offered to write an article about his life with motorcycles in this far off place to most of us. Here's his story:

"I decided it was the ideal time to have a mid-life crisis and search for my long-forgotten childhood, so about four years ago I decided that I should do something about it. Having given it much thought and being a practical sort of guy, I decided that a new motorcycle was in order -- decision made. “Easy” I hear you say - but there was a slight problem. I live in The Gambia, West Africa, and new motorcycles are rarer than chickens’ teeth and anything required has to be imported and manufacturers’ warranty is not something mentioned here. The only dealer importing motorcycles brings in SYM from China - designed for anyone vertically challenged as the seat height is lower than the ground clearance on most children’s bikes and the acceleration is something akin to paint drying on a damp day.

The Internet is a wonderful medium for finding information - and more importantly - specifications so I spent time comparing specs and reading of other bikers’ views. I must point out that I am not exactly new at riding having started in my teens when BSA, Royal Enfield and Triumph ruled the roads and Japanese bikes were few and very far between.

My first motorcycle was a Francis Barnet, a whole 125cc, not quite as fast as a striking slug, but it did get me to and from work, etc. During the ensuing years, I rode an assortment of machines and, whilst a member of HM Forces, spent many happy years on a BSA B40. Along with some of my colleagues, I became quite involved in the Trials scene and this led to organizing events that were open to civilian riders. I rode the Welsh Two-Day several times on an Army B40 and have the medals to prove it! Anyone who has ridden one will tell you it is not the ideal cross-country machine as the suspension travel is only a few inches and it needs either a very skilled rider to negotiate the terrain or someone with considerable strength to pull it out of the Welsh Bogs, of which there were many. I fell into the second class of rider but what has that got to do with The Gambia and buying a new bike I hear you ask? Absolutely nothing but it was nice to reminisce.

Having hit the web, I decided on a Honda from Motosport of Tampa but, being a little on the chunky side, decided that I needed a reasonable amount of horsepower to move that bulk without strain. The chosen bike was the Honda XR650L, air-cooled, designed to withstand rough terrain but also built to an exceptionally high standard of engineering - what did we do wrong all those years ago that lost Britain the motorcycle industry? These were not being imported into the UK so went “States-side” to find what I wanted. I might just add that the dollar was at two to the Pound Sterling at this time so I got a terrific deal. I was also in the fortunate situation that someone was bringing a container from the USA and had some spare space - just ideal for the Honda that was still in its protective cladding from the factory.

The USA has some strange rules; one of them being the machine had to be removed from said cladding, built up, tested to make sure it was ok and then dismantled and repacked. This done, the bike was sent to the shippers and I sat and waited for my boat to come in. Eventually it arrived and was delivered to our house. For those who are interested, we live in the middle of the Bush near a village called Sifoe (visit: www.reducetheuse.org.uk) and just getting things delivered can be a trauma. Fortunately, a friend of ours, Paul, (an American missionary and working here) was also buying a bike, a Kawasaki, from the same supplier so the deal was he would deliver them to our house and I would put them together.

Have you ever seen two boys drooling whilst looking in the sweet shop window? Well that was us! It’s amazing how fast we managed to unpack the boxes just so that we could see what was inside.

As Paul lives quite a distance from us, his was first to be assembled so that he could get home before dark - roads are not good here because of the absence of street lighting and also there are the hazards of drivers who do not turn on the lights in case they might wear out the bulbs! There were absolutely no problems putting them together and we even put Airseal in the tyres to reduce the likelihood of punctures from the debris that litters the roads and tracks here.

The Honda went together very easily and looked stunning. Getting on it is quite easy if you have a step ladder or are 7-feet tall as the ground clearance is an impressive 13 inches, making the saddle height a daunting 31 inches from Terra Firma. This gives a whole new meaning to getting your leg over! This is a tall bike but it handles magnificently and corners superbly despite what you may think.

The engine was carefully run in. As an ex mechanical engineer, I still believe that easy treatment during the first couple of hundred miles pays dividends at a later date. Time will tell! During this time, it was noticeable that the engine was definitely not delivering the power of which it was capable because of the smog prevention kit and spark arrestor that are fitted to comply with Californian legislation.

Baja Designs are whiz kids with the XRs and a quick email resulted in a Smog Block Off kit and the replacement Dynojet goodies. These arrived at about the time that the running-in was completed and I got to work on removing the air pump, smog canister and rubber piping that was surplus to requirement. I must praise Baja for their superb after sales service and the helpful, knowledgeable staff they employ. Carburettor duly modified, I gave the bike a road test; the response was amazing - and I still had to do the exhaust. The Gambia does not, as yet, have noise or emission controls so there was no problem in taking out the spark arrestor from the exhaust - it now sounds superb and has even more power. Ultimately I purchased a Big Gun exhaust that sounds fantastic and improved the response even more.

The road conditions here are ok but tarmac is only laid on the main roads so it really is an off-road paradise but care has to be taken as goats, donkeys and monkeys tend not to observe the Highway Code. Children are not taught even the basics of road safety so great care is needed at all times. The surface can change from tarmac to compacted earth to loose sand faster than a speeding bullet so tyre choice is very important. The bike was fitted with Bridgestone TWs, good on the road, not bad on the hard pack but awful on loose sand and, as I needed something that would be suitable for all surfaces, I hit the web again.

Life is full of surprises and, whilst searching, came across Trellesport Tyres in The UK. They were advertising a tyre designed for the Swedish Army that met all my criteria so I telephoned them. I last saw Gwyn Barraclough in the early ‘80s when we both competed in Army Motorcycling at National and International level. Gwyn competed in the ISDE on numerous occasions - but then he was good. When I spoke to the person at the other end of the telephone, I had no idea who it was but, when I gave my name, he asked, “Are you by any chance Dave Beardsley?” They do say it’s a small world; suffice to say, I now buy all my tyres and heavy duty tubes from him or Janet (when Gwyn is away instructing riders at a well respected off road experience centre) - and always get excellent service. The tyres are the best I have used and are great in all conditions. Wear rate is also acceptable but could be improved if the throttle was used more gently.

The bike is now well and truly run in, having done 36,000 miles since delivery, hasn’t missed a beat and goes wonderfully well. The oil and filters are changed every 2500 miles and I only use Castrol oil as it is a known brand – lots of poor quality stuff is imported into Africa so it is a case of buyer beware. Fuel consumption is not brilliant, about a hundred miles to a 2.77 gallon tank (that’s the smaller American Gallons - and they say everything is bigger in America) but consumption would be much better if the throttle wasn’t kept in the fully open position by a rider searching for his childhood.

I certify that this document is wholly written by me and no liability for any inaccuracies may be laid at the door of the publisher." -- David Beardsley, Siofe Village, The Gambia. 09 November 2011.

Be sure to look at David's three videos to see how he gets around his part of Africa.

Posted by Unknown at 5:33 PM No comments: 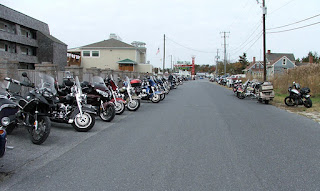 Honda is recalling certain model year 2010 NT700V motorcycles manufactured from November 26, 2009, through November 27, 2009, for failing to comply with the requirements of Part 567, "Certification."

The number of units affected is 120.

During the assembly process, the fuel pump o-ring may have been installed incorrectly in its groove.

The number of units affected is 1069.

Posted by Unknown at 9:53 AM No comments:

There may not be a proper seal between the fuel pipes for the fuel injectors and the fuel hose that connects them due to an improperly molded fuel hose.

The number of units affected is 2800.

Posted by Unknown at 9:27 AM No comments: 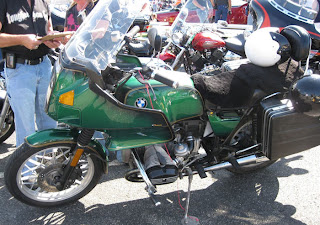 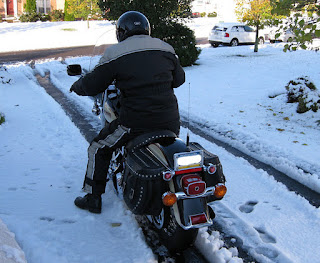 The first meeting of the Polar Bear Grand Tour was in Cape May, NJ on October 30, 2011. This was the day after the great pre-Halloween snowstorm that devastated northern NJ, NY, and CT. See pictures from Cape May which was pretty much untouched by the snow. See pictures
Posted by Unknown at 6:33 PM No comments: