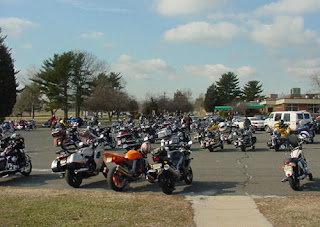 I don't know if you remember, but Fort Dix was in the news in May of 2007 after a terrorist plot was uncovered to attack soldiers at the base. That was after our last Polar Bear Grand Tour run to Fort Dix. We had our 2008 run to Fort Dix last Sunday, January 27, 2008 and security was tighter.

This was my first time back on my trike in three months and it felt good. I've been recovering from the removal of a couple of basal cell carcinomas, one on the back top of my left ear and one on the top right side of my forehead. These skin problems had conspired to keep me from putting a helmet on for nearly three months. Today I bit the bullet, put on my balaclava, gently placed my new Nolan flip-up helmet on my head and fastened the chinstrap. My glasses were rubbing against my ear and that brought a bit of pain. I was hoping that nothing was bleeding back there. The pressure of the helmet against the balaclava and onto the sore on my forehead was noticeable. The helmet felt smaller. Maybe it had compressed a bit from sitting in the garage for the last three months. At any rate, I was going to ride today. First was a four-mile ride to our monthly GWRRA Chapter F meeting. That went OK. Next was the 31 mile ride to Fort Dix. Surprisingly that went well too.

Jane and I rode with three other bikes from Chapter F. I cautioned the riders over the CB as we neared the fort to expect anything at the entrance because of expected tightened security.

The day was alternately sunny and overcast and about 33 degrees. There was a threat of light snow showers. Fort Dix was checking IDs today but not consistently. Sometimes IDs were checked, and sometimes riders were waved by. Some were stopped at the gate because their names were not on the Polar Bear roster. In one case, a rider was left at the gate while his wife was allowed in. Turns out his name was on the list all the time. But most got in.

Here are a few pictures and videos I took at Fort Dix. I confess I was a little apprehensive about taking pictures at the fort. I fully expected to be approached by an MP and have my camera confiscated but that never happened. I worry too much. There are a few pictures of me at the end taken by "Blondie," one of the Chapter F women who rode her own Honda Gold Wing 1800 with us. Hopefully, that will be enough pictures of me for a few years.

Posted by Unknown at 9:53 AM No comments:

I've noticed that many motorcycle road test reviews are now being posted in video form on services such as YouTube. You'll find a few of these videos listed in the new road tests that I've just added to my Motorcycle Road Tests Index. Expect many more road test videos in the future.

Pictures of the Week - Bill 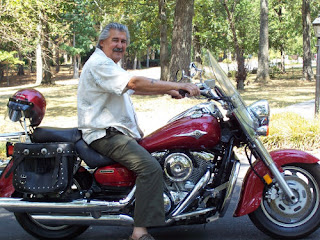 See Bill on his Kawasaki 1600 Vulcan.

If you'd like to see your bike as Picture of the Week, submit a picture of you and your bike along with a description of the bike.
Posted by Unknown at 11:28 PM No comments: 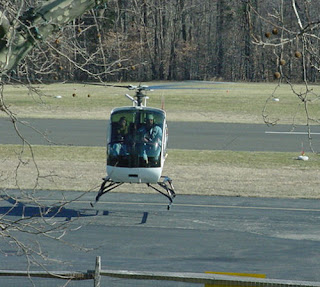 Today was the Polar Bear Grand Tour visit to the Flying "W" Airport in Medford, New Jersey. It was a really cold day with temperatures around 25 degrees and a biting wind. Not many riders standing around outside today. They were all standing on line inside waiting for the sign-in to open at 11:30 a.m.

The Flying "A" is a real operating airport for small planes. It was the first time that the Polar Bears had visited this intriguing site. While we were there, I observed several takeoffs and landings of small airplanes and I intently watched a small helicopter doing maneuvers right in front of me.

Take a look at pictures and videos I took today to document our visit.
Posted by Unknown at 8:29 PM No comments:

I have just updated my motorcycle makes and models information that links to the major motorcycle manufacturers' Web sites for 2008 models. Each model link provides pictures, specs, descriptions, prices, and more for 2008 motorcycle models.

The manufacturers are constantly evolving their Web sites and seem to enjoy restructuring many of their URLs with no thought to other Web sites that may be linking to them. That's why this mid-year update was done.

At this time of year, many riders are doing research to determine what bike they want to buy next. Hopefully, these 2008 Motorcycle Model links will be useful.
Posted by Unknown at 4:33 PM No comments:

Major Motorcycle Rallies for 2008 - It's Time to Plan 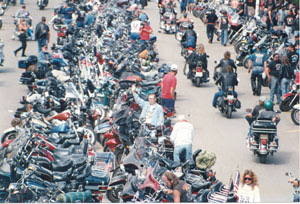 In the off season, many riders like to plan rides to various motorcycle rallies. I have just updated my motorcycle rally article and schedule for 2008 to assist you.

Motorcycle rallies (biker rallies) are simply gatherings of riders and motorcycles at specified times and places usually with attendant vendors, food, games, and other activities.

Motorcycle rally attendance varied widely from a low of a couple of dozen riders or less to huge organized rallies with hundreds of thousands of riders.
My updated article, Motorcycle Rallies (Biker Rallies) - Major Rallies for Motorcycles, gives basic information about motorcycle rallies. The second page of this article contains my list of the top motorcycle rallies.
The picture shows me raising my arm after I parked my bike on Main Street at the 1993 Sturgis Rally. That was the year of the great Midwest floods.
Posted by Unknown at 4:03 PM No comments: 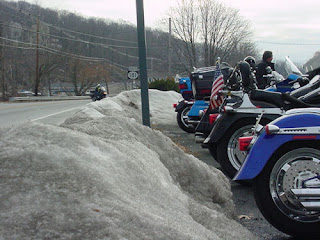 This was one of those iffy Polar Bear days. The temperature was near 40 degrees for most of the state of New Jersey but it lowered to near freezing or below at the higher elevations. Since our members come from all over the state and even Connecticut there was a good chance that some would find ice on the roads. That turned out to be true. Members of my own GWRRA Chapter NJ-F had traveled to North Jersey very early in the morning to attend another chapter's meeting before they rode to the Lake Hopatcong area for the Polar Bear Grand Tour. They encountered two icy parking lots and it was touch-and-go whether they would keep their bikes upright. They vowed never again to ride so early in the winter mornings.

This destination was the Wearhouse Grill. My GPS performed flawlessly to guide us right to the door. We arrived early and stood around until the flight leaders had setup to sign-in the riders. They had a special menu just for the Polar Bear Grand Tour. I especially liked the hot apple pie a la mode served in a glass mug.

Here are pictures and videos from this winter day run.

Posted by Unknown at 8:07 PM No comments: 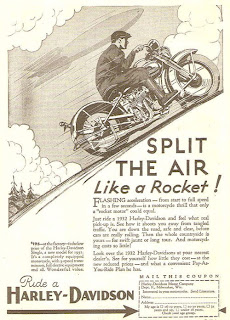 One of my forum members, MadMichael, has a collection of antique motorcycle advertisements that appeared in magazines many years ago. These ads are pretty interesting and reflect the times they appeared. You'll find ads from WWI and WWII and before. There are currently 80 antique motorcycle ads in the collection.

The prices were very low in those days as you'll see. There are many Harley-Davidson ads, a few Indian ads and then some ads for obscure makes. Take a look at my Antique Motorcycle Ads Gallery.

His jump, originally scheduled to coincide with the dropping of the ball in Times Square on New Year's Eve, was delayed because a previous televised football game went into overtime. In fact, I had set my Tivo to record the jump, then fell asleep and missed the jump completely because the Tivo stopped recording before the actual jump.

This was a jump dedicated to the memory of Evel Knievel. It's one not to be missed and I'm sure we'll be seeing more of Robbie as he tries to break his own record.

Members of my Motorcycle Views Forum did see the jump and provided links to videos of the jump. Take a look and add your own comments either in the forum or here, below, after you see the video.