It's very important to learn how to be safe when you're riding your motorcycle. Here's an article by Rob Geiger of Ultimate Motorcycling. It includes a video that features a world famous motorcycle racer who tells you how to be safe riding on the street. I think you'll find it useful. Read more and watch the video.

Also check out my 10 Ways to Be Safe on a Motorcycle.

In 1912-1913 - one hundred years ago - two men rode brand-new Henderson motorcycles around the world. Now, two modern men will attempt to duplicate the trip on BMW motorcycles. Ultimate Motorcycling has an article about the trip just begun. Here's an excerpt:

"Two BMW-riding adventurers from Northern Ireland - author Geoff Hill and former road racer Gary Walker - have set off from Dublin on the first leg of an 18,000 mile round-the-world expedition. The duo will replicate and celebrate the inspirational and ground-breaking adventure undertaken by pioneering Irish-American writer, and silent film director, Carl Stearns Clancy in 1912-1913." -- ultimatemotorcycling.com

Read the complete article.
Posted by Unknown at 3:41 PM No comments:

The 23rd James Bond film, Skyfall, utilizes Honda CRF250Rs in a chase sequence in Istanbul. As one might expect, there was considerable preparation by a stunt team since much of the sequence took place on the rooftops of Istanbul. Initial preparation was done at special training facilities and then moved to the actual rooftops. This YouTube video shows the preparation and some of the final product. Take a look.
Posted by Unknown at 3:00 PM No comments:

Motorcycle Picture of the Week - Don 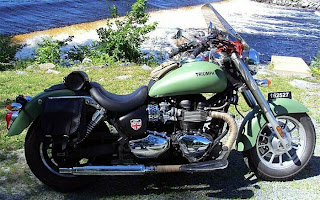 The license plate bracket assembly's mounting screws may loosen and the assembly may separate from the rear fender.

Posted by Unknown at 8:02 AM No comments:

Robert Pirsig, Author of Zen and the Art of Motorcycle Maintenance, to be Honored

Many of you have read and enjoyed Robert Pirsig's Zen and the Art of Motorcycle Maintenance. Robert is still around and Montana State University will be honoring him later this year. Here's an excerpt from MSN News:

"Montana State University will host a conference on December 7-9, 2012 honoring Robert Pirsig, writer and philosopher whose book 'Zen and the Art of Motorcycle Maintenance,' published in 1974, is one of the best-selling popular philosophy book of all time." -- MSN News

Read more of this article.

Read more about this book in my book collection.

Ever sell a motorcycle and then long to have it back? Ed sold his Harley and found a way to get it back years later.

Check out this video on YouTube for the whole story in Ed's words.

Motorcycle Picture of the Week - Russell 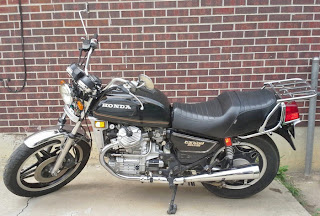 In certain riding conditions, the brake fluid in the front brake fluid reservoir can foam.

How to Make Motorcycles Out of Nude Human Models

Now here's something you haven't seen before. The Progressive International Motorcycle Show has come up with a way to make three motorcycles out of nude human models that have been body-painted. Here's an excerpt from an article in MSN.com. Then look at the video.

"They won't take you very far, but these bikes will look better than any Harley parked in your driveway. Led by body-painter Trina Merry, a team of air brushers (and, yes, two massage therapists) turned a group of models into three human motorcycles for the Progressive International Motorcycle Show tour." -- MSN.com

Take a look at the video.
Posted by Unknown at 3:42 PM No comments:

When Will Electric Motorcycles Make It to the Big Time?

Dexter Ford of the New York Times thinks that electric motorcycles may have a place but it may be a long time coming. Here's an excerpt from his article:

"The appeal of an electric motorcycle is obvious. It would deliver its power silently and instantly, without the need for oil, fire, smoke, noise, clutch or gearbox. Each fill-up would cost just a dollar. It might even talk to your iPhone, though it's hard to imagine what kind of a useful conversation the two might have. An electric bike might someday be the next big thing, in a 'what would Steve Jobs have ridden' sort of way." -- Dexter Ford

Motorcycle Picture of the Week - Kim 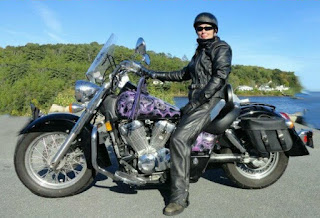 Many riders will soon be putting their bikes away for the winter. Here's my simple procedure to winterize your motorcycle.

Of course, if you're a member of the Polar Bear Grand Tour, you'll soon be taking your bike out of storage and getting ready to ride every Sunday during the winter to points in NJ, PA, NY, CT, and DE.

To each his own.

Posted by Unknown at 2:01 PM No comments:

Spinoff.com has an article by Jeffrey Renaud about Disney star, Ashley Tisdale. She has just appeared in two successive episodes of FX's Sons of Anarchy playing a high-priced escort. Here's an excerpt:

"With Tisdale concluding her two-part arc with tonight’s episode, titled 'Stolen Huffy,' she spoke with Spinoff Online and other members of the media about her love for Sons of Anarchy, shedding her good-girl image and playing a more physical character like Emma Jean." -- Jeffrey Renaud

You may want to check out the FX episode "Stolen Huffy" and the one before it to see her performance as she moves to transition her image to more adult roles.

Ultimate Motorcycling has an article by Ken Conte describing the motorcycle passion of actor Keanu Reeves. He is a long time motorcyclist who has teamed up with Gard Hollinger to form a new company with a new motorcycle. Here's an excerpt:

"Arch Motorcycle Company is built from a shared passion for and fundamental belief in performance and design. The introductory line of production motorcycles are in the prototype and industrial design phase currently, with production expected in 2013. Collaborators Gard Hollinger of L.A. County Choprods and renowned actor Keanu Reeves met in 2007 to tackle a customization project. What began as a simple undertaking over five years ago quickly evolved into an ongoing dialogue and shared vision for the elusive ultimate riding experience." -- Ken Conte

Motorcycle Picture of the Week - Kari 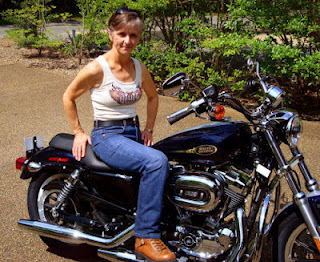