On certain motorcycles, the fuel tank is mounted to the chassis by means of tabs that are spot welded to the tank, then braised/welded around a portion of their circumference. Under certain conditions, repeated stress can crack the tank at the location of the tabs, and allow fuel to leak.

Check out my Motorcycle Recalls feature for more details.
Posted by Unknown at 12:29 PM No comments:

I had the good fortune to attend Rolling Thunder over Memorial Day weekend in 2005. In fact, I wrote an article about it with pictures. Take a look.

I also noticed that a great video about Rolling Thunder is also available on YouTube. The year of this video is not mentioned but it's either 2005 or 2006. It looks pretty much like the sights that we saw in 2005. Here's the video.

Posted by Unknown at 4:35 PM No comments:

Certain motorcycles may stall under deceleration due to an improper setting of the engine control unit (ECU). This could create the potential for a crash, resulting in injury or death.

Check out my Motorcycle Recalls feature for more details.
Posted by Unknown at 8:01 PM 2 comments:

Here's a great family story I just saw that involves motorcycles. In my family, it's just my wife and I that ride. Can't get the kids interested and probably won't be able to get the grand kids interested either. This story is about a complete family that rides. It's by Matthew K. Roy of the Salem News in Massachusetts. Here's an excerpt:

"Look at the photograph taken a half-century ago. Mom's on her motorcycle. Dad's on his. Sitting behind him is one of their children. And in a side-car attached to the rear of his bike are four more. Meet the Blais family. They took to the road on motorcycles back then and haven't stopped. The matriarch of this motorcycle family is Peggie Blais of Danvers. She has nine children in all, six sons, three daughters. 'They all ride motorcycles,' said Peggie, 79."

Read the complete article.
Posted by Unknown at 12:18 PM No comments:

I just opened my June, 2007 issue of Rider Magazine and found a strange pull-out ad of a Honda VTX1800F. It involves a driver caught in traffic who bursts through the roof and dons huge red wings. He leaps into the air and the words "Free Yourself" appear as a Honda motorcycle roars down the road. Turns out there is a TV ad of this. Check out the following link that describes the making of the ad and then click on the internal link to view the ad. I had to do a right-mouse-click "Save as Target" command to save it to my computer. You may have better luck.

View the TV Ad
Posted by Unknown at 2:08 PM No comments:

Motorcycle Trike Lifts Off the Ground

Some people think that a modern motorcycle trike is inherently unstable. They are actually thinking of the old 3-wheeler ATVs that were banned. Modern motorcycle trikes came after that with most built on stable Honda Gold Wing platforms that have a low center-of-gravity.

I took a trike training class that had an exercise to show how stable a modern trike can be. Trikes driven in a circle at high speed or making quick 180 degree turns will not tip over. They will possibly lift the inside wheel off the pavement but as soon as the wheel leaves the ground, the power to that wheel stops and the trike returns to the ground.

Posted by Unknown at 7:27 PM No comments: 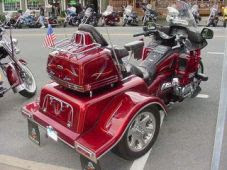 The resort town of Lake George, NY sees plenty of tourists, conventions, and gatherings during the year. However, its biggest draw is in June when it hosts the biggest motorcycle touring rally in the world, Americade.

The rally is held the first full week of June and for 2007, it's June 4 - 9.
The rally started back in May, 1983 and was then known as Aspencade East. Started by motorcycle racer, Bill Dutcher and his wife Gini, the rally attracted 3000 motorcyclists in its first year. By 1986, the name was changed to Americade and drew in 10,000 registrants. Current attendance is estimated to be nearly 50,000. Counting the people who simply show up without registering just to "hang out" on Canada Street, the total attendance probably exceeds 100,000. Read more.
Posted by Unknown at 1:29 PM 1 comment: