Pictures of the Week - Kelly (K-man) 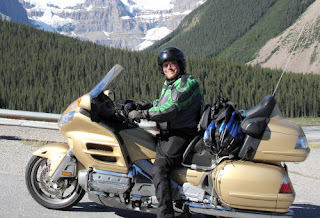 If you'd like to see your bike as Picture of the Week, submit a picture of you and your bike along with a description of the bike.
Posted by Unknown at 10:10 AM No comments: 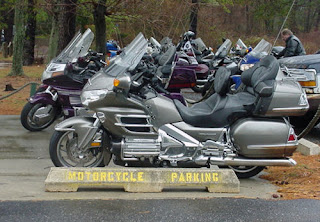 Another rainy day! This is supposed to be the Polar Bear season. Even though it's now officially winter, it continues to be more like spring with 58 degree temperatures.

This was our first run to the Sweetwater Casino. It's located in the Pine Barrens of New Jersey in the middle of nowhere right next to the Mullica River. The place is big enough to hold the Polar Bears when we show up in force. They even have motorcycle parking up front on concrete -- this works fine except when the Polar Bears show up.

Here are pictures and videos from this rainy run.

Check out my Motorcycle Recalls feature for more details.
Posted by Unknown at 5:34 PM No comments:

Certain motorcycles have an improper welded vent pipe in the bottom of the fuel tank. Due to vibration the improperly welded tanks may crack and drip fuel. Fuel leakage in the presence of an ignition source can result in a fire.

Check out my Motorcycle Recalls feature for more details.
Posted by Unknown at 5:26 PM No comments: 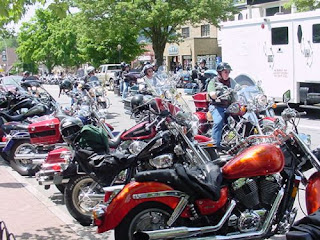 The top eight Motorcycle Views Blog posts have been selected from a total of 150 posts made in 2007. These eight blog posts were chosen for a variety of reasons.

If you haven't been a regular reader of the Motorcycle Views Blog, you may be missing important information about motorcycling. You might also be missing some of the personal aspects of my life that may give you a chuckle or an insight into my take on motorcycling.

Check out my picks for the Top 8 Motorcycle Views Blog posts for 2007.

Posted by Unknown at 4:13 PM No comments: 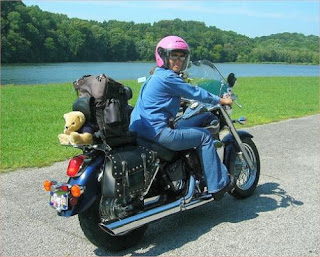 The top ten motorcycle pictures were picked from pictures submitted to Motorcycle Views in 2007. The pictures are not ordered.

The pictures were chosen for a variety of reasons. I looked at each picture, read each description, and picked those pictures that held my interest.

On certain motorcycles equipped with an optional accessory luggage rack, undersized washers were used which prevents the sliding carriage from moving as intended. Reduced stability can occur if the motorcycle is ridden with the fitted accessory, exceeded maximum weight, and at speeds far in excess of the 80 mph limit warning, increasing the risk of a crash.

Check out my Motorcycle Recalls feature for more details.
Posted by Unknown at 3:50 PM No comments:

Motorcycle Pictures of the Week - VaRyder 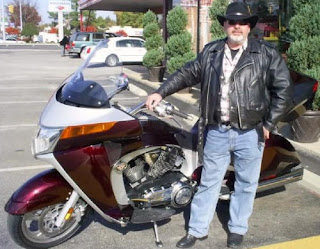 If you'd like to see your bike as Picture of the Week, submit a picture of you and your bike along with a description of the bike.
Posted by Unknown at 7:29 PM No comments: 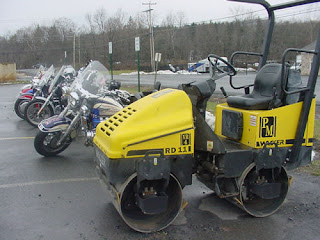 I've always worn a full face helmet when riding my motorcycle. Of course, living in New Jersey kinda forces you to have this mindset since it's the law here. The only time it gets to me is when I have medical conditions that don't allow me to put the helmet on in the first place.

The first time that happened was when I had a basal cell carcinoma on my right ear that required mohs surgery to remove it. That was a major deal for me that took months to heal. I had to forego riding all that time.

Now, I found out that I have two more basal cell carcinomas, one on my forehead and one behind my left ear. All this occurring during the prime Polar Bear Grand Tour riding season. I happen to run their Web site and I go to all the runs to take pictures for the site. Needless to say, I will probably go another two months without being able to put the helmet on again. Worse than that is that the healing of the one on my forehead is slow with a big black scab that is quite unsightly in public. And, of course, I have so many functions to go to and I have no way to hide the healing. I'm either embarrassed when people see me or find myself constantly trying to explain the medical problems. I seem to be cursed to have all these maladies so prominent on my head and also unable to hide them with a helmet or even to ride my trike. I guess all those years toiling in the sun while I worked in the corn fields nearly 50 years ago have finally come back to haunt me.

Now I find out that after the surgery on the left ear that the pathologist's final report indicates that they may not have got all of it and I have to undergo radiation -- perhaps as many as 20 visits. Turns out that one of the members of my Gold Wing chapter heads a team at my hospital that does the treatments. At least I have someone in my corner.

All this is going on right now but still the Polar Bear pictures have to be taken and I need to be at the runs. I do have a couple of backups who can take pictures and they have come in handy in the past. But, I like to go to the runs as much as I can. This week the run was to Snydersville, PA to Schoch's Harley-Davidson and I was determined to go.

Turns out that many family events were also going on this weekend. On Saturday, we drove to our son's home for a combined birthday party and tree trimming party. I heard that there would be about 10 little kids there to celebrate the second birthday of my granddaughter. I think it was actually closer to 20 kids. After that we drove farther north to my other son's home where we ended up babysitting for the other five of our grandchildren (all under 10) and then staying overnight. The next day, we had breakfast, said our good-byes to all the kids and grand kids and headed down route 80 to Snydersville, PA for the Polar Bear run.

It was a day that was overcast, cold, and threatening rain or snow. We were in the car so we didn't much care. When we arrived, there was a smattering of bikes in the parking lot. As I walked around the parking lot with my camera, I didn't notice as many bikes coming in. Apparently, the threat of bad weather had reduced the attendance. Maybe we got 100 bikes. Normal would have been 400-500. Anyway, I did get some pictures and three videos. Check out the Polar Bear Grand Tour - Schoch's Harley-Davidson/Buell Run for pictures and captions.

After the run, we drove home and had a couple of hours of free time before we had to attend our Gold Wing Chapter's Holiday party. It was fun as usual but I did have the usual set of medical questions. At least I was with friends. I spoke with the member who heads the radiation team at the hospital and he offered me his personal help. That was very comforting and appreciated.

I also had to part company with my 1994 Chrysler today. It's been sitting in my driveway most of the time for the last two years since I bought my new Honda Accord. It was time to use it as a donation to one of my favorite charities, Juvenile Diabetes Research Foundation. I had arranged with JDRF.org for the auto donation and the big flatbed arrived this afternoon to cart it away. The end of an era. Getting to be too many of those recently. At least I won't have to worry about hitting it every time I back my car out and I also won't have to move it so I can get my motorcycle trikes out of the garage.

I guess I'm a rambling man today but that's what's been happening. The calendar is almost completely filled with events for the next month. My wife is having physical therapy while I'm going to be busy with radiation treatments. Christmas is coming and I haven't been out doing much shopping or even leaf raking. I was told that retirement meant I would be busier than when I was working. I'm getting that in spades.
Posted by Unknown at 7:34 PM No comments:

Motorcycle Pictures of the Week - Harleymike56 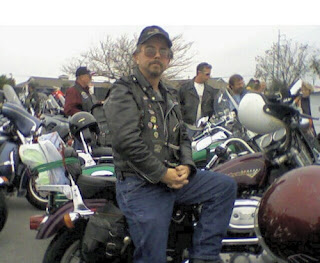 See Harleymike56 on his Harley-Davidson Sportster 1200. Mike is also a member of my Motorcycle Views Forum.

If you'd like to see your bike as Picture of the Week, submit a picture of you and your bike along with a description of the bike.
Posted by Unknown at 12:26 PM No comments: 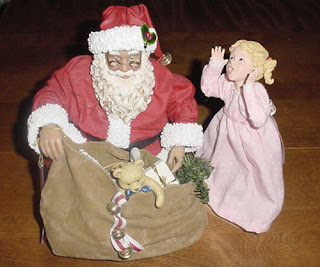 Recently, I mentioned in this blog that I had written five children's stories about a special character, Motorcycle Santa. I have just finished writing the sixth story in this series. It's based on a true incident in my life. I hope you'll enjoy this story of a little girl who is awakened by the arrival of Motorcycle Santa as he is placing gifts under her tree. Santa agrees to open one present for the girl to get her to go back to bed. The girl startles Santa by devising a game that uses the gift in a new way. I hope you enjoy "Motorcycle Santa - The Game."
Posted by Unknown at 7:06 PM No comments: 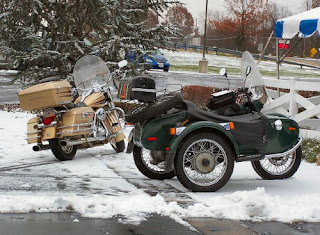 A winter storm was approaching the PA, NJ, NY region this morning. Since I was still unable to put a helmet on owing to my two recent surgeries and I also had two of my grandchildren spending Saturday and Sunday with us, I was not going to the Polar Bear Grand Tour run to Montgomeryville, PA.
I had already made arrangements with my backup, Bill, to take pictures at the run. When I got up today, there was a quarter inch of snow on the ground in NJ and the temperature was about 36 degrees. It felt good not going out and attempting to travel the 60 some miles to Montgomeryville. But, I knew that many Polar Bears would be making the trek so I looked forward to receiving the download from Bill later this evening to see just what it looked like over there.
Bill tells me that eight bikes showed up and two were sidecar rigs. The rest were cars, trucks, and SUVs carrying other Polar Bears. See for yourself by viewing Bill's pictures and reading my captions. Check out the pictures from the Montgomeryville, PA run.
Posted by Unknown at 10:46 PM No comments:

Motorcycle Pictures of the Week - Jeff 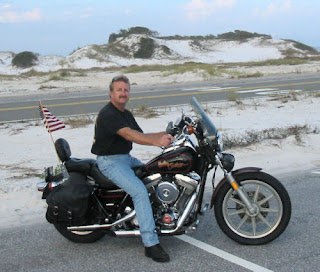 Here are my Pictures of the Week as displayed on the Motorcycle Views Web site. These are taken from the Moto Pic Gallery. See Jeff on his Harley-Davidson FXRS.

If you'd like to see your bike as Picture of the Week, submit a picture of you and your bike along with a description of the bike.

Posted by Unknown at 8:40 PM No comments: