I'm going to describe Day 12, 13, and 14 together. The trip home was a scorcher. The temperatures were in the high 90s and Jane does not tolerate heat.

After the parade, we rode from Lake George to Saratoga Springs (35 miles) without too much discomfort. We found out that our daughter's long driveway was being repaved to fix a drainage problem. That meant we had to park the trikes on the street and carry our "stuff" up to the house. Later we were allowed to park the trikes near the house just before the new section that started at the garage. We covered the trikes with the full covers. Later that day the winds started and blew the cover on my trike completely off onto the ground. That had never happened before. I folded up the cover and used my lightweight black cover which had five tie-down spots and remained in place.

On Day 12, Sunday, we all went to see a movie, Kung Fu Panda, that the grand kids wanted to see. I thought the first 20 minutes was a bit boring but the action started up after that and it got funnier and funnier.

After that Jane and I took our grandson to buy his own birthday present. This was his 10th birthday. He picked out a Wii game.

When we got back to the house, we had supper and our grandson got to choose his favorite meal. We had cake afterwards and he blew out the candles. 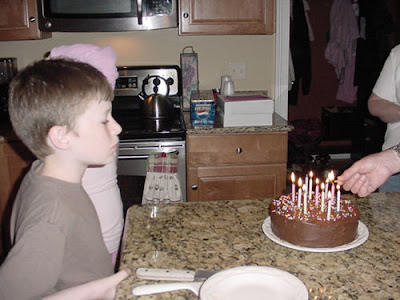 Our grandson got a lot of presents and he and his sister, in a remarkable spirit of cooperation, proceeded to work together to build a complicated structure. 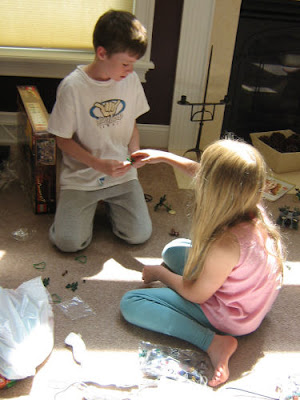 On Day 13, Monday, we packed the trikes early and headed to Boonton, NJ to stay the night with our son. The heat was brutal!

We stopped for gas about 120 miles down I87. We also went inside and had a quick lunch and some cool drinks. We had 65 miles to go. The heat got unbearable after we got back on the road.

When we turned off at Boonton we got caught on a street with a fast cycle traffic light. It was letting about five vehicles through and to top that off, there was a crossing guard working both directions at the corner where we wanted to turn. We couldn't figure out why the crossing guard was even there. It was only 12:30. We found out later that the schools had been closed early because of the heat. Jane and I sat there for close to 20 minutes in the 95 degree heat inching along. Over the intercom Jane said, "I'm going to pass out if we don't get moving." When she says that, I know we are in for some troubling times.

We did finally get through that intersection and followed the GPS to our son's house.

We arrived and Jane slumped over the handlebars. I got her a drink of water out of my water bottle. She still wasn't moving very well. I went into the house and yelled for my son's wife. No response. We figured she wasn't home so we went in and made ourselves comfortable. We got some soda out of the refrigerator and some cookies to munch on. We sat at the kitchen table and rambled on for 15 minutes about politics and finally heard my son's wife yelling from far off in the house. I figured that she knew we were there and it would only be a minute or two before she popped in to the kitchen. But time passed.

After a while she did appear and seemed to have just been on the phone with our son. She had found out from him that we would be visiting. She hadn't known we were coming at all.

That evening we all went out to supper and afterwards we went to a place that has indoor batting cages. Our 11-year-old grandson would be practicing for an hour. I had never been to such a place where a machine throws balls at you at whatever speed you program in. Once when my son left the batting cage to speak to another coach, my 5-year-old grandson decided he would operate the machine while his 7-year-old brother batted. I saw the first pitch come sailing by and quickly informed my son what was going on. Both he and the owner of the place were quickly inside the cage to get the 5-year-old off the machine. That was close!

On Day 14, Tuesday, we packed up the trikes again and left Boonton for our destination. The temperature was near 95 degrees as we traveled the last 80 miles. I could tell that Jane wasn't doing well. We arrived home and she was pretty much out of it for the rest of that day and the next day too.

Today, Thursday, she was feeling much better. The heat is not a friend of Jane's. Maybe that's why we enjoy our Polar Bear Grand Tour riding so much in the winter.

Today, I spent most of the day opening our pool. It was a series of problems and right now it looks like I have every tool from my work bench out there.

We're back from Americade. We look forward to next year but hope that it will be cooler. The pool is open and running. Summer is approaching. Jane is feeling good again. That's always my objective.

I'll have one more installment of this blog to show you a set of pictures taken at Americade. I also promised you road tests for the three demo rides I took. That should be happening within the next week.

Pictures to follow. Read the blog each day for further reports.

An evolving blog index to these Americade 2008 blog entries is also available.
Posted by Unknown at 6:43 PM