On Wednesday we had breakfast early at the restaurant located in the motel. The weather was misty rain. We debated whether we should ride to the demo with rain suits on but decided to wait until we got there to decide. We were going to take a demo ride in a Stallion made by Thoroughbred Motorsports. The Stallion was designed by Motor Trike CEO, Jeff Vey. The drive train is made by Ford Motor Company. It has one wheel in front and two wheels behind. It's a trike by definition even though it has a steering wheel, automatic transmission, heat and A/C. Here's my 2008 Thoroughbred Stallion User Review that I did after I returned from Americade.

Just to show the different kinds of riders you see at Americade, I shot this picture while sitting on the porch of a pizza restaurant at noon. You can keep riding even if you are disabled. Just take along a wheelchair. 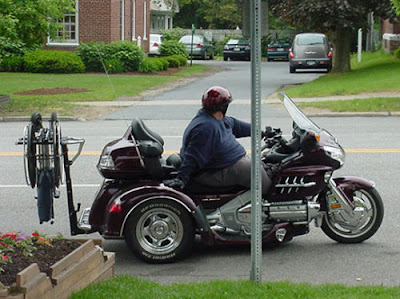 Our neighbors at the motel were Harley guys. They didn't seem to know much about Americade but they sure knew how to have a good time. Here's Jane posing with one of their Fat Boy motorcycles that they had parked on the porch next to our door to keep it out of the rain. 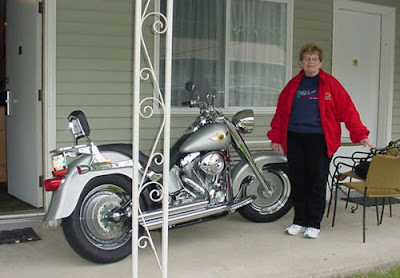 We rode up to Roaring Brook Ranch (RBR) two-up this evening to attend several seminars. We had a quick supper in the coffee shop before making the short walk to the seminar building. Pete Woodruff was speaking as we entered the room a bit late. We took seats in the back. This was a seminar on triking.

As the hour came to a close more and more people were entering the room and getting seats in anticipation of the seminar by Fred Rau. Fred writes for many motorcycle publications but is most known for his articles in Motorcycle Consumer News (MCN). Currently, Fred is also operating a motorcycle touring service in California.

As usual Fred confessed that he came unprepared to talk but would wing it. The audience didn't seem to care since Fred is usually a pretty funny speaker. He proceeded to place emphasis on his touring service especially personal experiences of the participants. The double room was completely full of people and laughter.

An hour or so after the seminars were over, there was a Balloon Glow. I saw this last year also. Basically it's three hot air balloons that are tethered to the ground with intermittent bursts of flame to light up the balloons. The whole thing has background music and a certain amount of narration by one of the balloon pilots to egg on the balloon keepers to fire up their flames so people can take pictures. Here's a picture of one of the balloons. I also took a short video of all three balloons going strong. (This video loads slowly. Let it complete in slow motion and then replay it to see full motion.) 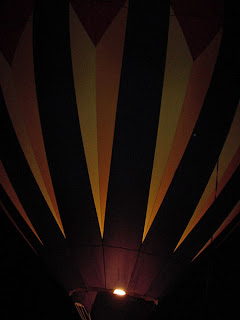 After the Balloon Glow, we returned to the motel, parked the trike, and walked down Canada Street for a little night life. Here are a few pictures.

I got this picture of a Ward's Riverside motorcycle. Probably bought it right out of the catalog. 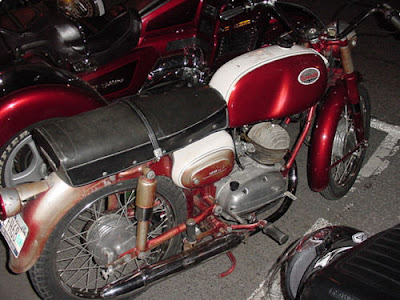 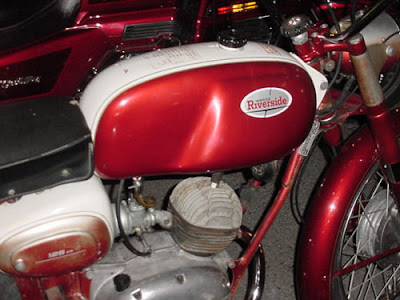 An evolving blog index to these Americade 2008 blog entries is also available.
Posted by Unknown at 5:00 PM

from MYANMAR.
www.winzaw-mdy.blogspot.com
welcome u and visit to my blog