On Thursday we parked our trikes across the street from the motel and had breakfast where the famous Wegars used to be located. They still have the old player piano there but it's not turned on. The overhead train is totally gone. The food was good anyway, except they ran out of donuts.

We headed out to Tour-Expo. I hadn't been there yet. When we got inside, Jane went one way and I went another. Cell phones would get us back together later.

I walked past the Corbin booth and saw a Spyder all decked out in a touring seat, touring bags, and full fairing. I had heard that a Spyder touring model would soon be introduced and I thought maybe this was it. A few words with one of the reps standing there informed me otherwise. Corbin had accessories to make the Spyder into a tourer. Only about $5000 would do the trick. Corbin was ahead of the curve again.

I stopped in at Cycle Gadgets and picked up a long extension for my camera mount.

Then I turned the corner and strolled over to the Motor Trike area. I wanted to talk to the Motor Trike dealer from New Jersey. I finally found him and explained a problem I was having with my rear trunk. It kept loosening up, was hard to open, and always let rain in. Every time I stopped, the door was ajar and I had to reopen it and then slam it shut, usually skinning my knuckles in the process. Then another rep from Canada came over and offered advice. My explanation of the layout of my trunk hardware was lacking and I really needed to show them the actual trunk.

I walked out to the parking lot and returned to the side gate outside Motor Trike where the two reps examined the situation. The guy from Canada said the latch needed to be repositioned and lubricated. He went looking for tools and a thick washer and returned with some WD-40 as well. In five minutes, he had the trunk working perfectly with an easy open and no leaks. As far as I was concerned, my trip to Americade was worth it just to get this free fix. Thanks Motor Trike.

Also, I told them about the vibration I had been getting. The NJ guy slid under the trike and checked everything out. "No problem," he said as he emerged covered with dirt on the back of his T-shirt and grease on his hands from the trike undercarriage.

I also asked about why the left side rear fender was so close to the tire while the right side was not. Then the rep pointed out that there was an abrasion all the way around the tire where the fender had been rubbing against it. Whoa, we have a problem here. He said he could fix it in his shop in New Jersey by making a simple undercarriage adjustment. I needed to make an appointment when I got back from Americade. Better still, his shop was close by my house.
More problems were being solved by my trip to Americade.

At 3 p.m. we rode down to the Log Jam Restaurant to meet members of our GWRRA chapter who had ridden up for the day. Here are a few pictures. 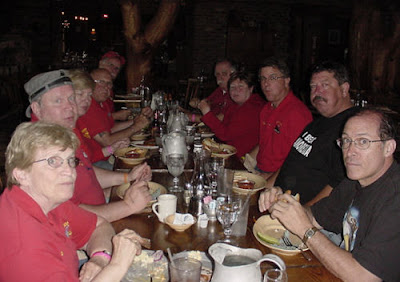 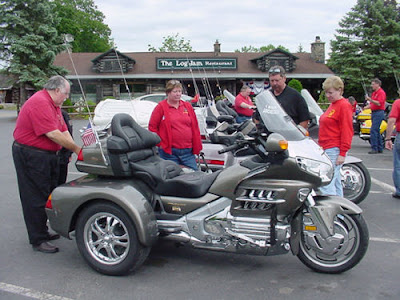 That evening we walked Canada Street again and I took the following pictures and videos. First off is a bike carrying just about everything needed to go to Americade. 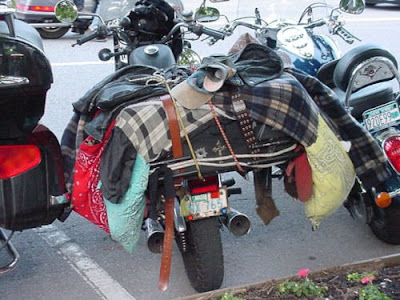 Dogs were everywhere. Some got the royal treatment like this one in his own trailer. 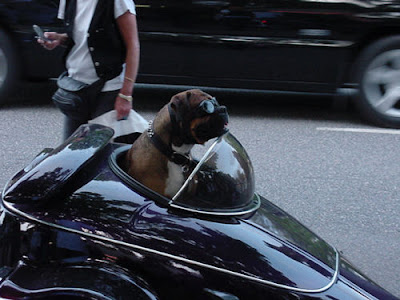 It's a car, no it's a bike, maybe it's a trike. Regardless, it's fun for the Americade scene. 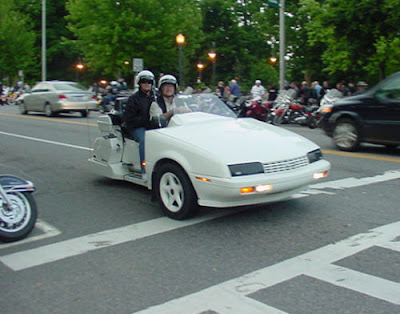 Jane looking at a Spyder decorated with a spider web. 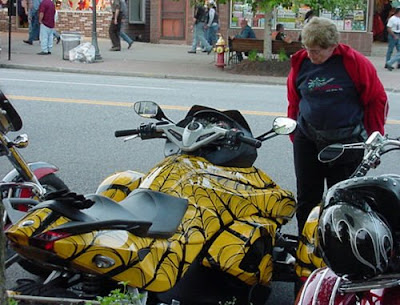 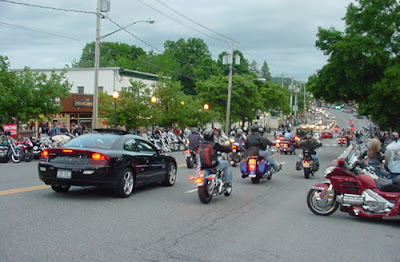 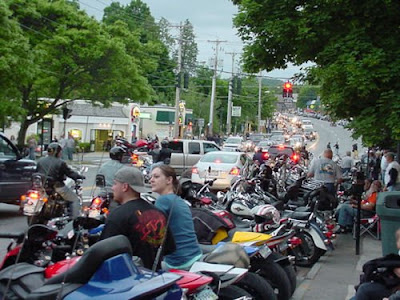 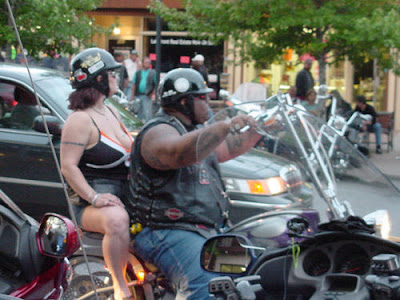 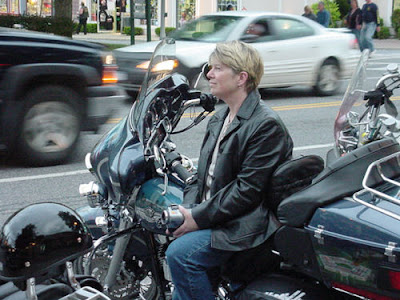 The cops were giving out parking tickets this year. If you didn't have a PP sticker for $7 or didn't keep feeding the meters, you got one of these. 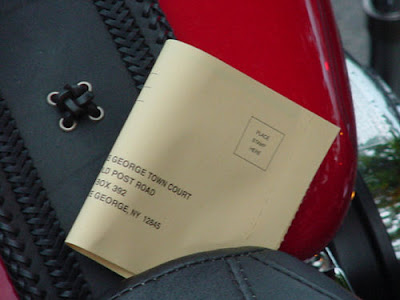 A block from our motel I saw a 911 memorial bike. It was pretty spectacular. I also took a short video of Canada Street traffic. (This video loads slowly. Let it complete in slow motion and then replay it to see full motion.)

Finally, I also took a short video of me walking alongside the Canada Street traffic.

An evolving blog index to these Americade 2008 blog entries is also available.
Posted by Unknown at 11:53 AM