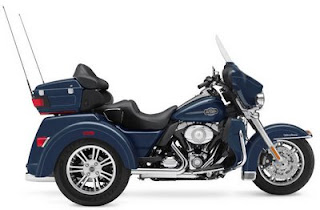 Yesterday, Harley-Davidson introduced its models for 2009. One of them is a motorcycle trike called the Tri Glide Ultra Classic.

Harley-Davidson hasn't made a trike since the Servi-Car that started out as a vehicle that could be attached to a customer's car so a mechanic could deliver the car and then use the Servi-Car to return to the garage.

Later the Servi-Car had other uses mainly for police use. Here's a YouTube video of a 1954 Servi-Car now owned by an enthusiast. He shows off the trike with the siren blaring.

The Milwaukee Journal Sentinel has an article by Rick Barrett that gives more details about the new Tri Glide trike. Here's an excerpt:

"There’s a Harley-Davidson coming for those of us seeking more comfort or who have a fear of falling. Harley-Davidson Inc. has introduced a motorcycle for those of us with a taste for comfort or a fear of falling. The Tri Glide Ultra has three wheels and a brand-new chassis design. It retails for $29,000. The maker of Fat Boy and Softail bikes has sized up its customer base and found that many riders would rather be on three-wheelers than two-wheel behemoths that are too tall and too heavy for some people. Starting in the next few weeks, Harley will begin offering three-wheel touring bikes called trikes." -- Rick Barrett

Here's what Harley-Davidson has to say about the Tri Glide in a Press Release on its Website.

It appears that trikes are now more than just kits added to an existing motorcycle. They have attained a new level of acceptance as Harley-Davidson embraces them in its product line and, more importantly, backs them up with Harley-Davidson service.

I've been riding a motorcycle trike for eight years. My wife got hers before I got mine. I wrote an article about her experience in getting her trike.

In the beginning there weren't too many of us out there and we got a lot of attention on the road, in parking lots, and especially at gas pumps. I even wrote an article with standard questions I get and my answers.

I also wrote a How To about learning to ride a trike.

Then I created a Trike Picture Gallery.

Maybe trike riders are becoming mainstream after all. Thanks Harley-Davidson. Let's hope that Harley's 42 year run of Servi-Cars will be surpassed by a 50 year run of Tri Glides.

It looks pretty cool. Will have to see it in person to decide if I like it.
Thanks for th info.

My Tri-Glide has arived today . I want to do smothing to the back end It is plan looking. Got any ideas?