Friday started with packing the trikes again in my son's garage in Boonton. Here are the trikes just before I pulled them out to begin on the next leg of our trip. 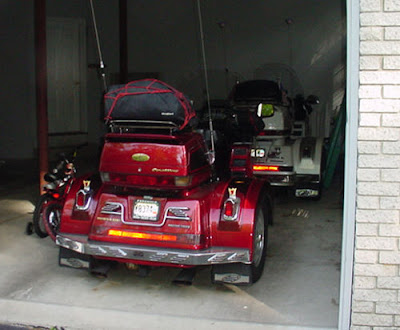 Today's ride would take us to the Saratoga Springs, NY area where our daughter and two of our grandchildren live.

The ride to Saratoga Springs was straightforward. Just ride north to I87 -- the Northway -- and keep going. However, shortly after Albany, I began noticing a vibration through the footpegs of my trike. That had never happened before. I thought I was on my old '94 Sportster again.

I thought maybe the U-Joints were going. Or maybe it was the trike undercarriage that was loose somewhere. Jane said her trike once felt the same way and we found that one bolt had completely worked itself loose and fallen out. I was getting worried.

As we approached my daughter's place, the vibration was still there. I thought maybe the road surface might be causing it but I just didn't know what to think.

I knew that Motor Trike would be at Americade and that the dealer who built my trike might also be there. Maybe he could look at it and see if there was any obvious problem that could be corrected. I decided to call the dealer who was located in PA. Sure enough, he would be here on Thursday and said he would take a look at it but couldn't promise anything. I expect to go visit Motor Trike soon after Tour-Expo opens on Tuesday to see if anyone else there could take a look at it before Thursday. I continue to be worried about this. First I have to ride the trike another 30 miles to get to Lake George. That will give me another chance to see if the problem is persisting. Wish me luck.

We finished the evening by attending a softball game in which our granddaughter was playing. She just decided one day that she wanted to play softball at age eight and she's pretty good in her first year. Of course I may be prejudiced.

We got there early and Jane, daughter Sue, and granddaughter Caroline got in some family practice. It made for a memorable picture of three generations. 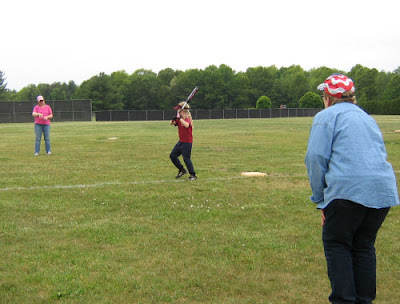 It seems that almost every girl playing softball has long hair and they're all tied back. Caroline is in the middle. 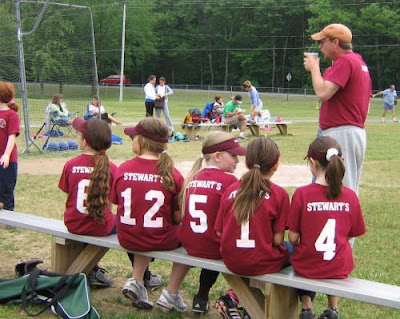 I had no idea how these games are now run. The pitcher could only throw five pitches to one batter before a coach from the same team stepped in to throw two pitches. I guess this allows each batter a better chance of hitting the ball and gaining experience in hitting. These are only eight and nine year old girls.

The game runs a total of 90 minutes. The limit came and it was nearly 7:30 p.m. We headed for a late dinner at McDonald's before heading home.

Tomorrow, Saturday, would bring two more games, one softball and one baseball. Rain was expected.

An evolving blog index to these Americade 2008 blog entries is also available.
Posted by Unknown at 2:26 PM