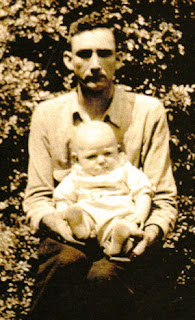 Here is a picture taken in 1938 of my father, Walter Kern, with me, his first son. I haven't written much about my dad but he had a very technical life. He started out by leaving home at the age of 17 to drive in a Model T Ford to California from Indiana with a friend. He got homesick and returned to Indiana and then to Illinois. Along the way, he worked for Westinghouse, became an inventor, ran his own automobile repair shop, and ran his own radio repair shop. He worked on special projects for a military contractor in World War 2. He never got beyond the fifth grade in school. But he could do anything technical and was often asked to devise prototypes for military products that none of the engineers could figure out how to do. He was pleased that I decided to study electrical engineering and became the first person in his family to become a graduate engineer. He knew cars. When I took up motorcycling in 1989, he said he didn't know anything about motorcycles. He didn't try to lead me in any particular career direction but supported me quietly. The only opposition I ever got from him was when I wanted to learn to drive a car. I was forced to take a school sponsored driver education course to get my license. I found out on his death bed that he lost his first wife in a crash caused by two escaping criminals who smashed into his car containing him and his pregnant wife. I didn't even know he had been previously married. But, he was a gentle man mostly who provided a stable home environment with my mother and my sister and brother. I guess we all have stories to tell about our dads. I have barely scratched the surface here. But on this Father's Day 2013 on the 105th anniversary of his birth, I heap just a bit of praise on him and hope that in some small measure you will think of your own dad and remember all that he brought to your life. -- Walter Kern