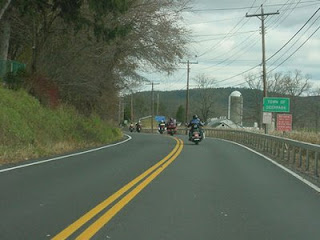 Last weekend, the Polar Bear Grand Tour ride was to Port Jervis, NY. I was feeling a little under the weather so I opted to take the car instead. After this ride I drove to a special Thanksgiving party held by my GWRRA NJ-F (F-Troop) chapter at Old Man Rafferty's in Hillsborough, NJ.

I encountered few bikes on the road to Port Jervis as I passed through three states (NJ, PA, and NY) to get there. However, when I arrived, the parking lot was filled with bikes whose riders were waiting for the flight leaders to show up with the sign-in books.

Usually, I'm riding Jane's white trike in memory of her but the trike was in the shop getting two new U-joints installed. I plan to have it on the road for the run to Hopewell, NJ on November 23rd.
Posted by Unknown at 10:01 AM