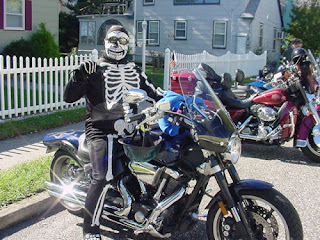 Here are some pictures from the first riding event of the Polar Bear Grand Tour for the 2007-2008 season, the run to Cape May, NJ on October 28, 2007. This event was just before Halloween and some rode down in costume.
Take a look at all the pictures I took, including two short videos.
My riding group encountered a very bad accident on the Garden State Parkway on the way down to Cape May. I believe it was just before the Toms River toll plaza. Traffic was halted in both directions of the Parkway while rescue helicopters landed and transported the injured. We were within 100 yards of the accident and many people got out of their cars and off their motorcycles to observe. I took a few pictures of that too.
Posted by Unknown at 9:10 AM