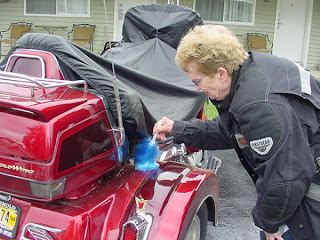 This year I'm going to try publishing highlights of Americade 2007, day-by-day in this blog. This is the 25th year for Americade. It's scheduled for June 4-9 this year. The blog will also include my preparation in getting ready to take the ride to Lake George, NY, my observations while there, the ride home, and getting back to normal.

I missed publishing yesterday, so here's my blog entry for Wednesday.
We are getting a lot of pollen here. It gets all over the bikes. Here's a picture of Jane with her duster, cleaning the trike.

After Jane bought her new Nolan helmet, she and I tried to communicate over the CB -- Didn't work. I could hear her but she couldn't hear me. We tried all sorts of switches of components but nothing worked. We even got lots of help from the "sidewalk mechanics" here at the motel. I couldn't keep up with all their suggestions, none of which did any good. I was frustrated. We decided to wait until today when Valerie would join us for breakfast at the Lone Bull Restaurant. We could see if she could communicate with Jane.

When Valerie arrived, she was immediately able to talk to Jane over the CB. I still couldn't. I decided it was time for me to get a new helmet. Maybe it wouldn't help the situation, but at least, I really needed a new one.

I headed out to Tour Expo and went straight for the same helmet vendor where Jane bought her helmet. The lady waiting on me was the owner and a rider herself. She answered all my questions. I tried on the same model Jane got except in a large. Her medium size was way too tight for me. The large was perfect. I really needed a red helmet with earphones and a microphone. My luck was good because she had one in the back. I tried it on and bought it on the spot.

We decided to take Jane's Mini-Tour. This is a special downhill twistie tour that Jane likes to take every time we come to Americade. It would give us a good chance to try out the new helmets and CBs. We asked Valerie to go along since she had also purchased another Nolan helmet (different model). As soon as we fired up the bikes to start out on the tour, every one of our CBs was working perfectly -- even mine!

We committed a cardinal sin by failing to start out with every bike having a full tank. Valerie's bike had less than a quarter tank but we fully expected to find a gas station shortly. Unfortunately, every place was either closed, out of business, or overflowing with long lines of bikes. One gas station referred us up the road, but there was nothing "up the road." Finally, the low gas indicator came on Valerie's Gold Wing 1800 and then we began to sweat.

Jane announced that she thought there was a gas station up ahead where I87 intersected the road. She was right. We limped into the station with hardly any fuel left in the tank.

That night we walked over to Mario's for supper. We've gone there almost every year and they know Jane when they see her. We had a great meal and then walked downtown. It was so cold. It was a sea of black since everyone had on their riding jackets to keep warm. It was so cold that we didn't even stop for ice cream!

Tomorrow, we will be heading over to Roaring Brook Ranch to hear Fred Rau speak. Then we'll be riding back through town and all that bike traffic. I expect to have my camcorder running both going and coming.
Posted by Unknown at 12:27 PM