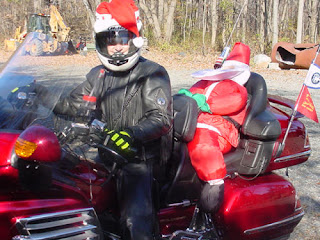 I awoke this morning to a 29 degree temperature on the thermometer outside my kitchen window. That was at 7:30 a.m. At 8 a.m. Jane and I were inside the local Old Country Buffet to have breakfast and participate in our Gold Wing Road Riders Association (GWRRA) NJ Chapter F meeting. We are the treasurers of that group. Today we weren't on motorcycles. I couldn't put on a helmet because I've just had two surgeries to remove basal cell carcinomas, one at the top of my forehead at the hairline and the other just behind the top of my left ear. Wearing a helmet is impossible until healing takes place. That's why today was a series of motorcycle adventures without motorcycles.
After the chapter meeting we drove to Hopewell, NJ for the fifth run of the Polar Bear Grand Tour. History was not kind to Hopewell. It was in Hopewell in 1932 that the Lindbergh kidnapping case occurred. In fact, Lindbergh's mansion is just a few miles from the Hillybilly Hall where the Polar Bear Grand Tour met today.
It was a perfect winter day. Clear skies and brisk temperatures greeted the riders as a seemingly endless stream of motorcycles rode into Hopewell. I got there early today and recorded in pictures and videos what I saw. Take a look.